On 11/9/21 Park Ridge Mayor Marty Maloney, the Park Ridge Chamber of Commerce and many event attendees celebrated the 10th Anniversary at Iannelli Studios with a Ribbon Cutting.  Thank you to all who came out to celebrate this milestone with us. 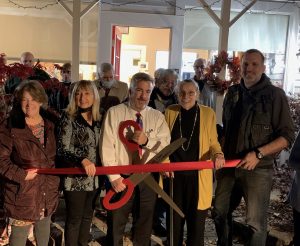 Kalo is pleased to announce we have joined At Home in Chicago, a group of house museums. We are now listed on their website.
This gives us more exposure to the world of museum goers and hopefully brings more visitors  Click here for more information.

When we acquired our Lincoln bust in Jan.2016 we had no idea what was ahead. In March of the same year our Friend Tim Samuelson called and said the French Council General and a few other people would like to come to the Studio and see our Lincoln. They liked it and thought it would work for the Paris -Chicago Committee.

No word for quite a while. And then in Oct. another call from Tim, the President of the Paris committee and her party would like to see the bust. She loved it.

We agreed to keep in keep in touch. Originally they wanted to have us ship the bust to Paris, but costs and risk were to prohibitve. I suggested a mold made by our restorationist and shipped to Paris. Months have gone by trying to negotiate and working everything out.

After over a year of talking and working together, the money has come forward and we will soon be turning our bust over to Mike for mold making. That process takes about a month.Once completed it will be shipped to Paris where a bronze will be cast by a French foundry.

Renee, the president, has been working and has a fantastic location for Abe. in the 8th arrondissement at the intersection of Ave George 5 and Rue Francois 1er next to Lincoln and Champs-Elesees. Things are finally moving forward. Abe is going across the pond. There will now be an Iannelli in the middle of Paris for all to see.

From a former Park Ridge resident:

I was looking at http://mashable.com/2017/06/17/life-in-the-navy/#nAY15.QieOq3 and found World War II photos by Fons Ianelli, the sculptor's son and a noted New York photographer. There is actually an exhibit of these photos at a New York art gallery.  You may want to check out the photos.

This is a link to the Park Ridge Herald Advocate (Chicago Tribune) story published on August 2nd.
http://www.chicagotribune.com/suburbs/park-ridge/news/ct-prh-lincoln-bust-tl-0803-20170728-story.html

The plaster study of Lincoln is now mounted and displayed at Iannelli Studios. Done by Iannelli in the 20's as a mock up for the Lincoln Hwy.  Stop by and see another piece of original artwork, our wonderful collection keeps growing. 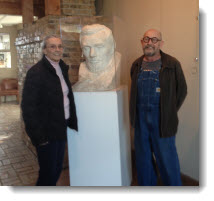 The Kalo Foundation of Park Ridge was established in 2006.  It is a nonprofit organization dedicated to preserving the rich artistic legacy of the city of Park Ridge, IL.